Here is the first PCB that came out alright: There were several fails before this. This post will document some of the things I have learned so far. First off, in my limited experience, tracing paper is much better than transparencies for printing the artwork on to. I’m using a 1200×1200 dpi laser printer and when using the transparencies the artwork consistently came out of the printer blurred. I tried changing around some settings on the printer but the blurred images persisted. Then I tried tracing paper and it really is brilliant stuff. It looks like the ink can adhere to the tracing paper much easier than the transparencies so the images are much more sharply defined: The next step was finding out how long the UV exposure box takes to fully expose a PCB. Under exposure will result in short circuits and over exposure will result in broken traces so finding the right amount of time is important. I found the right exposure time by trial and error. I knew it was probably somewhere between 2-8 minutes based on other UV boxes I’ve seen online. The way I found the perfect amount of time was by printing out some tqfp-44 packages onto tracing paper like so: I’m using pre-sensitized fr4 boards at the moment. So I cut off a piece of the fr4 big enough for the 5 tqfp packages. I then exposed the whole thing to UV for 2 minutes and then every 30 seconds after that I blocked off one tqfp package from the UV using a piece of cardboard. That means for every tqfp footprint was 30 seconds of extra exposure. The first run I started from 2 minutes, then 30 seconds later blocked off one tqfp part and so on for 2 and a half minutes. This gave me exposure time from 2-4.5 minutes. This is the result: 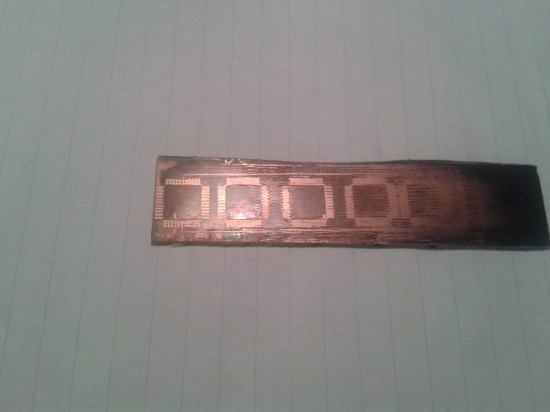 The above image isn’t very clear but basically the rightmost tqfp footprint was exposed for 2mins, the next one for 2.5 mins and so on all the way up to 4.5 mins on the very left. I didn’t bother fully etching this board because it was obvious that around 4-4.5 mins was the minimum. I then repeated the experiment starting from 4.5 mins up to 7 mins. Here is the results of 4.5 – 7 mins. The best one is 4.5 and the most faded is 7 mins. Looking at the left most footprint in the above image some of the pads were slightly over exposed. So I went with 4 minutes for exposure instead of 4.5. I then printed a test circuit seen on the stop of this page. Its just the top layer of a two layer board:

It’s got a ssop-16 package and a ssp-20 package which both have fairly small pin pitch and it etched out just fine. I used this guide on making PCBs made by Mike from mikeselectricstuff . It is an extremely useful guide and his methods give great results.