How to get the most voltage out from your wheatstone bridge

Wheatstone bridges. Great craic. But how do you get the biggest voltage swing possible out of it? Lets examine an example situation:

Lets say someone throws a PT100 thermometer* on your lap and orders you to plug it in to a Wheatstone Bridge. This person also tells you that the temperature span to be measured is 20 – 100°C. 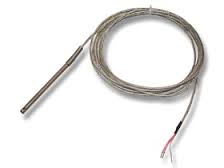 PT100 *(basically a variable resistor whose resistance varies with temperature)

After consulting the PT100 datasheet we get the following information:

This gives us a total change in resistance of 220Ω.
With this basic information we can start to work out the values of R1, R2 and R3. First, check out the circuit diagram of a wheatstone bridge: 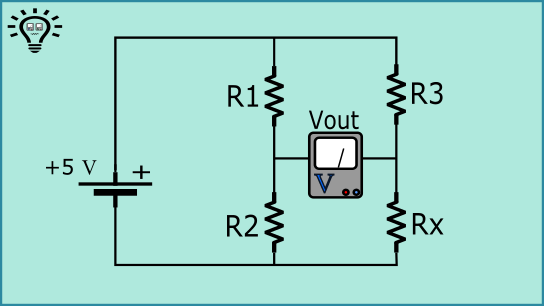 The equation that relates the voltage out to the supply voltage and resistor values is given as:

To simplify the maths we can set the two top resistors equal to one another. i.e R1 = R3. To make things even easier, lets just call them both by the one letter : R. This change can be seen in the diagram below. Also note that R2 has been set to 120Ω 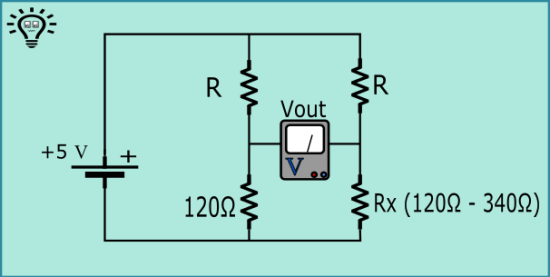 For this example Rx is a pt100 thermometer but this tutorial applies to anything with variable resistance.
At the low end of our range (120Ω @ 20°C) we want the bridge to ideally output zero voltage. This is achieved by setting the resistor across from it (R2) equal to this lowest resistance of 120Ω. The ultra cool group of people that know wheatstone bridge lingo would say that the bridge is ‘balanced’ when Rx = 120Ω ( when the temperature is 20°C).

Before going any further, lets first answer the question “why should I bother trying to get the maximum voltage out possible?”

The next question is : “What value of R should I choose to get the biggest possible output voltage”?
This is best answered by plotting Vout vs R. First we need to fill into the wheatstone bridge equation:

For filling into this equation we choose Rx = 340Ω because we want the max Vout when Rx is at its max range.

by simplifying the right hand side of the equation we get:

If we now graph Vout vs R we get:
(click on graph to enlargify) 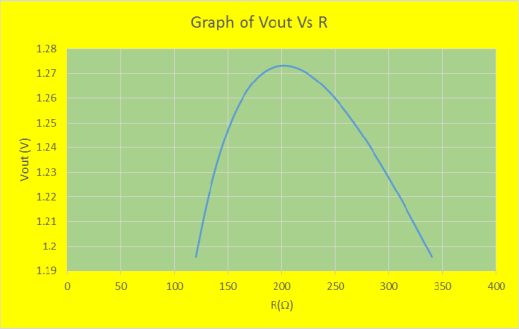 We want to find the value of R that gives us the maximum Vout. This is pretty easy to see on the graph. Just look at the peak of the curve and look at what R value it is.

To do this using maths we have to differentiate the above equation. This is because the part of the graph we are interested in is where the slope of Vout = 0 (in other words the peak of the graph)

This is the above equation differentiated with respect to R.

Now set the left hand side to 0 to find the value of R when the slope of Vout = 0.

and solve for R:

This value seems to match up with the plot of Vout vs R. It’s kind of unfortunate how small a change it makes in choosing R. Looking at the above graph the difference is only tens of mV, hardly worth thinking about for most applications probably. This might be because I chose such a big change in resistance for this example (220Ω). Some strain gauges vary by as little as 1-2Ω! Maybe it is more worthwhile to find the best R value when the change in resistance is tiny.

Like Loading...
This entry was posted in how to and tagged differentiation, max, voltage swing, wheatstone bridge. Bookmark the permalink.