Measuring how boiled an egg is – using sound waves – Attempt #1

Spoiler Alert: This didn’t work out due to the fact that whatever contraption I build tends to fall apart or not work properly when placed in boiling water. I’ll continue to work on the problem. Maybe there is some kind of high temperature, water resistant glue out there that would fit my needs.

The idea is simple. As an egg is boiling it changes from a liquid type state to a more solid type state. Is there a way to represent this change using electricity? Well, maybe. The way I went at the problem was using soundwaves. These soundwaves were generated using these little piezoelectric transducers seen below. piezo transducers with the back covered with sugru

The transducers are placed on opposite sides of the egg. One of the transducers is hooked up to a signal generator outputting a sine wave of around 6v and at a frequency somewhere in the 1-5KHz range. This sound wave propogates through the egg and is picked up by the other transducer. The amount of sound energy that reaches the receiving transducer hopefully changes as the egg boils. The amount of sound energy that propagates through will probably either go up or down as the egg boils. At a guess, I would say it would go up because as the egg becomes more solid it can absorb less sound energy meaning more energy passes through to the receiver. This increasing of sound energy reaching the receiver could be measured as an increasing amplitude of the sine wave generated at the receiving piezo. The first rig I built was built just to find out what kind of amplitude might be seen on the receiving end for an un-boiled egg. See below for a picture of the rig: 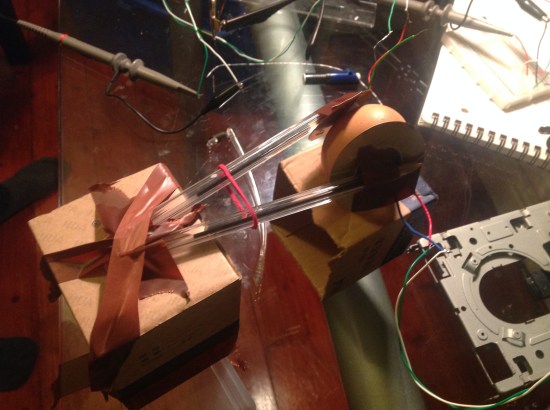 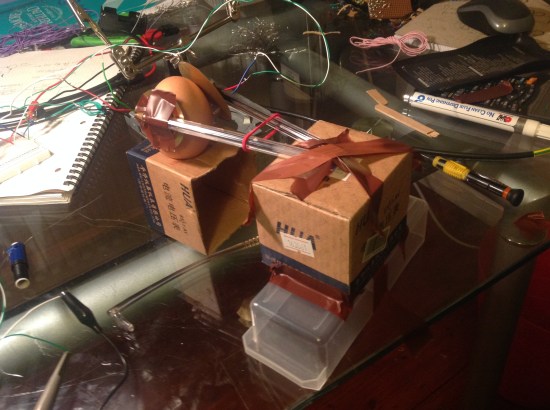 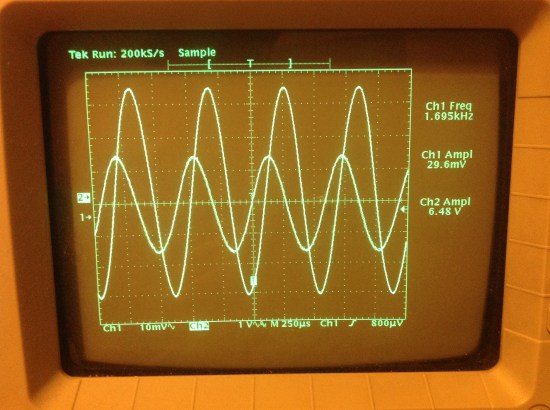 Oscilloscope output : ch1 is the receiver voltage (approx 30mV) and ch2 is the input

With an input of around 6.5 volts, only around 30mV makes it to the receiver. This is pretty small but not small enough to be too off putting. If it was micro-volts then there would be a problem!. The first test rig was held together with electrical tape and rubber bands – not very boiling water resistant so I moved onto test rig #2 seen below: 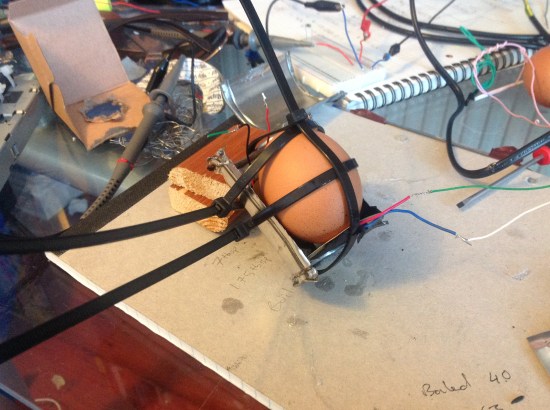 It’s kinda hard to see from these photos but this is just a tin can that I cut in half. The piezos are held on to the can using sugru. For those that haven’t hear of surgru, its basically a rubber that comes in a soft state, once you open the pack it can be shaped as wanted and in 24 hours it will harden. The sugru packaging says that it can withstand up to 180 degrees which I’m going to have to call bullshit on seeing as the whole thing fell apart after about a minute in boiling water. Also a big problem was the thing bouncing around whilst in the water. This caused the received voltage to jump around and the results were totally unusable. For the next rig I tried to make something that weighed a bit more so it wouldn’t bounce around in the boiling water. I used an old speaker frame as the base and this time tried to have the transducers sitting on top of the egg, not actually in the water. The hot glue sticks I use have a max temperature of 120 degrees C so I decided to give that a go to hold everything together. I present to you rig #3 in all of its glory: 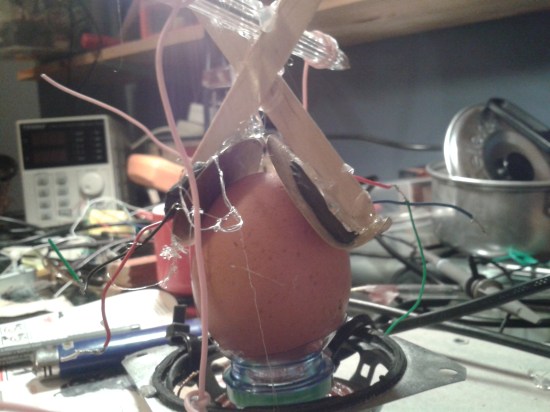 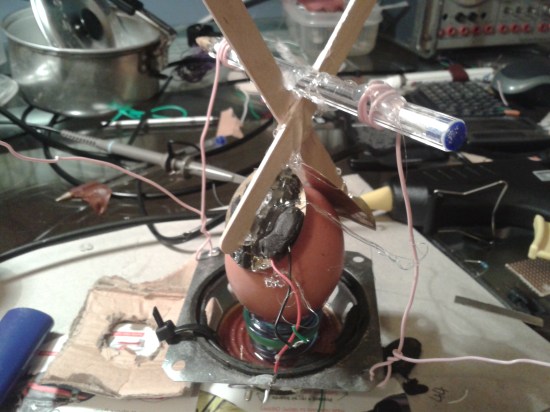 It doesn’t look pretty and it didn’t even get the job done. This also fell apart after a minute or two even though everything was raised above the water. The heat of the steam was enough to melt the glue and once again, everything fell apart. At this point I was getting kinda fed up with the whole situation but then I cam across this stuff: “AAAWWWWHHHHHH YEAHHH” was my initial reaction upon finding this in woodies diy store for only €7.99 . This stuff comes in a liquid type state and hardens after a few hours. It’s meant for use on things like oven doors etc. perfect for what I wanted (or so I thought at the time). While I was out that day I came across something else I didn’t even know existed but was exactly what I wanted and needed. It was a microwavable egg container. As in you put an egg in this thing, add some water, throw it in the microwave for a few minutes and you have a boiled egg! I wasn’t interested in the microwave part, just the fact that the container was shaped like an egg and had space for two piezo transducers. See below for the egg holder thingy: 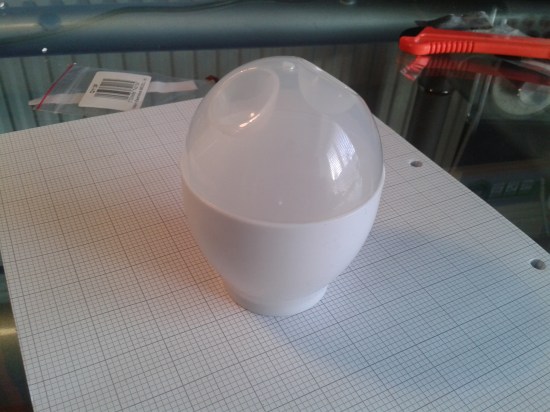 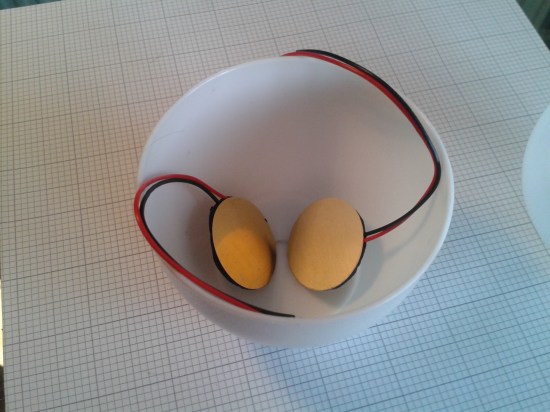 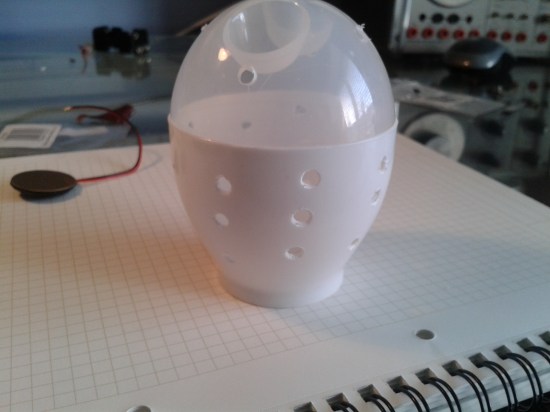 The holes were drilled to let the water in. The transducers were put in place and then the sealant stuff was squirted in to hold everything in place. This rig also failed because the sealant isn’t meant for use in water. All of the sealant dissolved in the boiling water leaving everything covered in a grey goo. Oh yeah and everything fell apart. AGAIN. So I’ve had enough eggsperimentation (lol) for a while. If you have any ideas on a better way to do this, please do let me know!