Automated readings of an RFID tag in a metal trolley 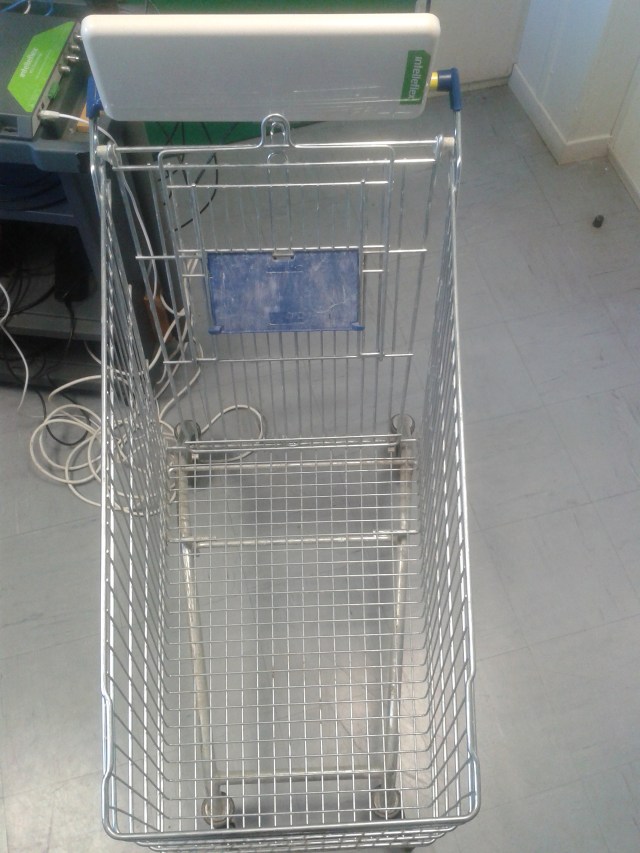 For a college project, I’m working on an automated product identification system for trolleys used in shops. As you can see from the above picture, this would involve mounting an antenna (attached to an RFID reader) on a trolley. All of the products in the shop would have small RFID tags on them and as soon as a customer takes one off the shelf and puts it in the trolley, it is detected and registered.This sounds simple enough but there are lots of problems with the idea. In this case the trolley is a metal grid and radio waves and metal don’t mix all that well. Reflections in the trolley can cause ‘blind spots’ due to destructive interference and things of that nature. Without doing experiments , there is no way to know how well it will work. In this case its best to do the experiment and then think about the theory afterwards. The proposed experiment is this:

1. Mount antenna on trolley ✓
2. Place and RFID tag in the trolley at certain positions
3. For each position the product is in, try to read it with less and less power to see how low it can go before being unreadable.
4.After that is done, move the antenna to a different part of the trolley to see how the results differ

Here are all the spots where I am going to place the product with a tag on it: 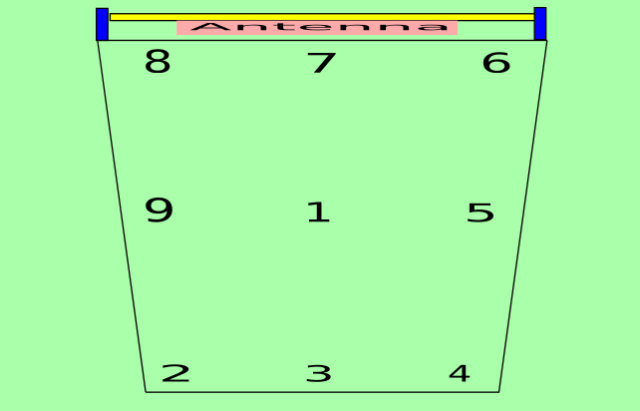 This is a picture of the empty box with said tag on it: 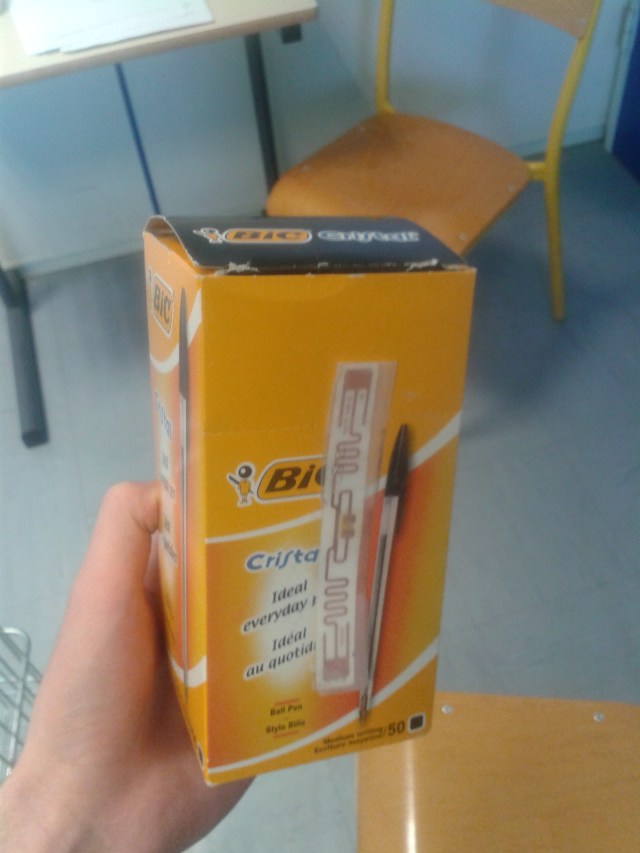 In my last blog, I wrote a Python script to decrease the reader antenna transmit power from 30dBm down to 0dBm whilst measuring the received tag signal strength. This is useful because you can quickly see what the lowest power that can be used is. Here is an example graph of that script, the tag was placed in the trolley and this is the output: 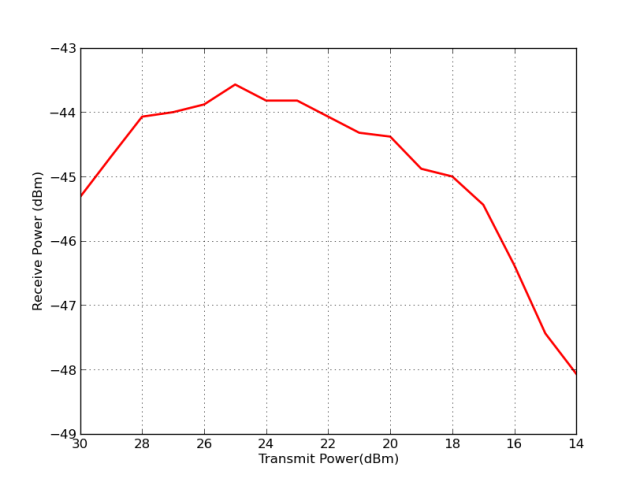 So now the experiment is slightly different so I modified the script to run 9 times, each time it runs a line is added to the graph. So at the end there are nine lines on the graph, with each line representing a different position in the trolley. After the program gets one set of readings ( at one position ) it waits for the user to press enter before it takes the next set of readings, this allows me time to move the product to a different position in the trolley.

Here is the Python Script:

Here is a reference for the graph. So each line can be matched to a position in the trolley: 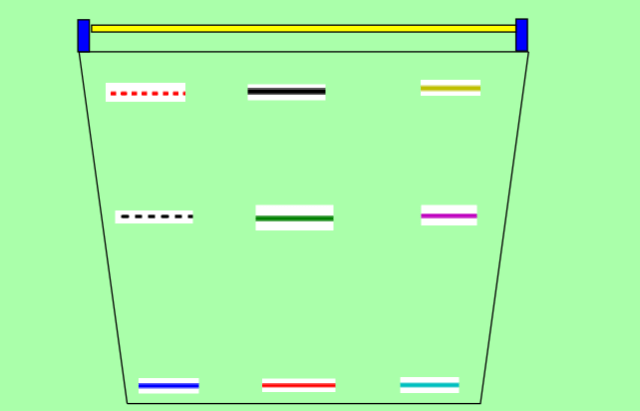 Antenna mounted on handle:
(click on the picture to get a full view) 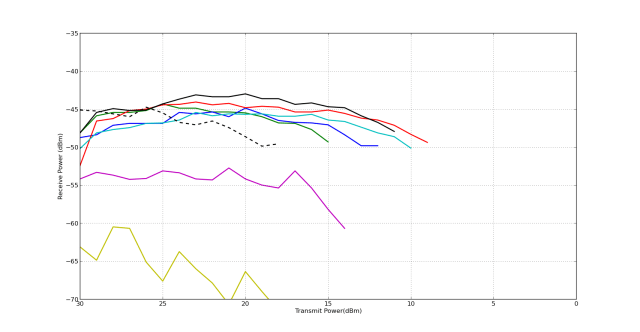 Notice that when the tag is underneath the antenna (solid black line) the received tag power is quite good, but on either side of that position the received power is not nearly as good. The red dotted line is missing because the tag could not be read at that position.

Antenna mounted on the front of the trolley: 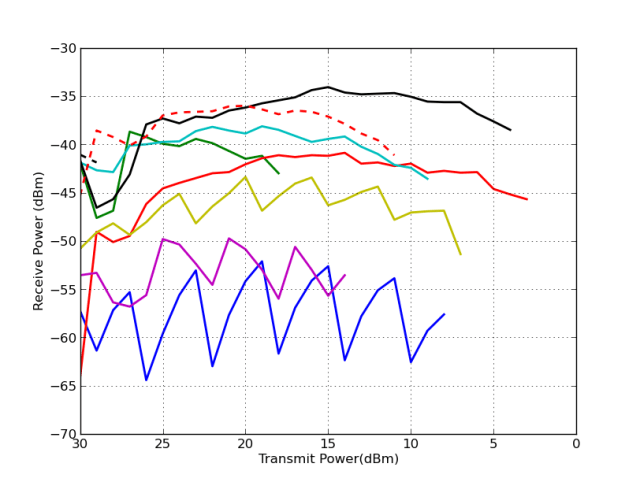 Much better results this time. The the tag located opposite the antenna at the back of the trolley (dotted black line) can only be read with max power. Apart from that every other tag can be read down to quite a low transmit power.

Antenna mounted under the trolley: 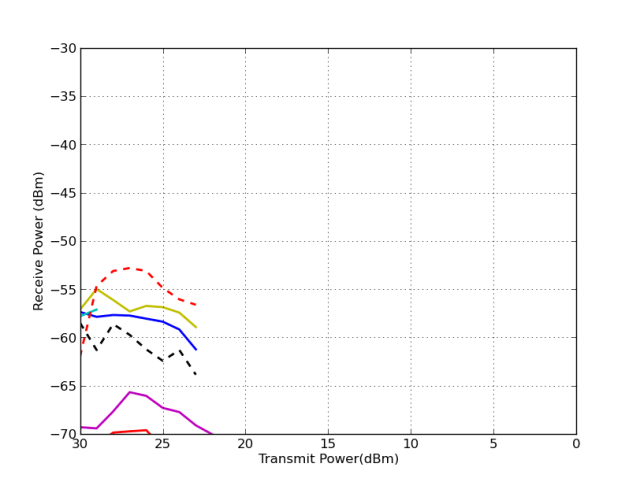 Mounting the antenna so that it is ‘looking in’ to the trolley as opposed to trying to transmit through the metal grid of the trolley is definitely the way to go. When the antenna was mounted on the front, I could only mount it vertically due to the slightly awkward position. I will try to mount it horizontally next week and see if that improves results. Also I could try and increase the sensitivity of the reader. This would be at the expense of read speed but it would be interesting to see what affect that would have.