So I may have gotten a bit carried away before with the whole egg thing. Tried building a working prototype without first doing some experimentation to make sure it is possible to tell how boiled an egg is by using sound waves. I’ve gone back to the basics and done some experimentation. The results are not conclusive really so some further eggsperimentation will be required. I posted about this on reddit and received some great input from several users. One person suggested measuring the time delay between the input and output signal and observing how this changes between boiled and unboiled eggs. In this experiment I measured both amplitude and time lag the results are recorded below.

I bought a six pack of eggs and labelled them individually as seen in this photo: 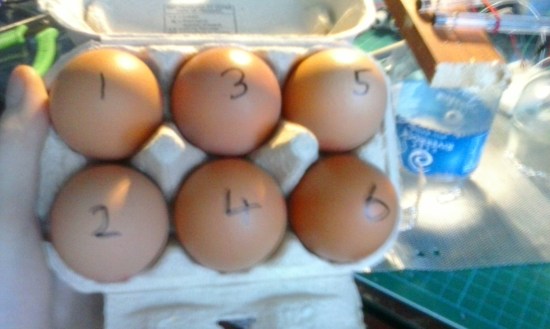 I made a test rig by mounting two piezos on the end of pens. There is also a place for the egg to sit. 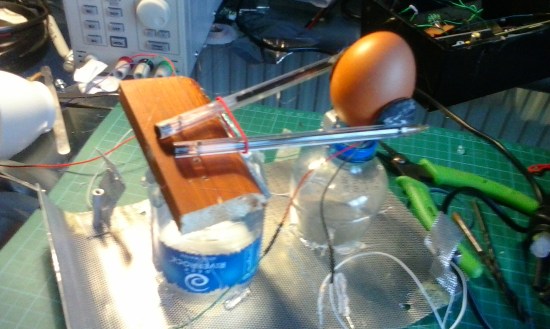 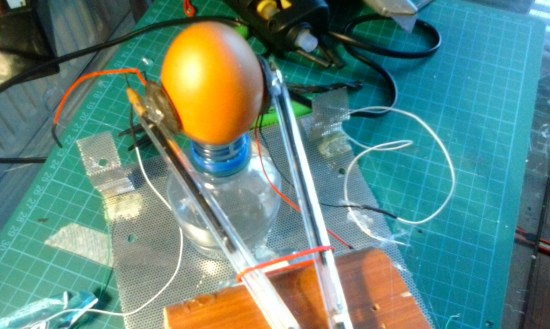 A sine wave with amplitude 9.44V and frequency of 4.46KHz was input into one of the transducers. For this experiment I placed eggs 1-6 in the rig and measured two variables : amplitude ( at receiver piezo ) and the time taken for the sound wave to travel from sender to receiver. This time difference variable will be referred to as delta t in the results. I did this procedure three times for the un-boiled eggs and three times for the boiled eggs. The eggs were boiled for different amounts of time. All of the eggs were placed in one pot, the water was brought to boiling temperature and every two minutes an egg was taken out. So egg 1 was in for 2 mins and egg six was in for a total of 12 mins. Here are some photos of the egg boiling setup: 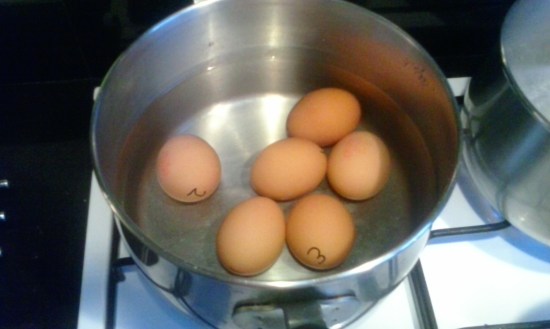 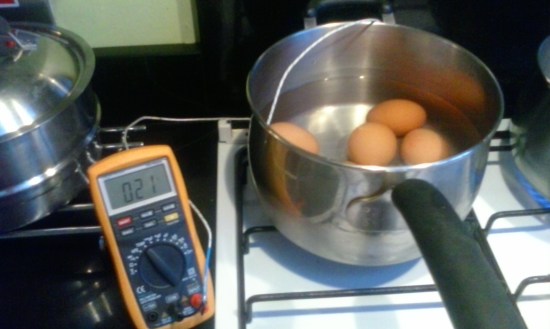 These are the results from before and after boiling the eggs. The reason I did each test three times was to reduce any errors caused by poor contact between an egg and the transducers and other errors of that nature. Delta T refers to the time lag between the input signal and the output (received) signal it is measured in microseconds. mV refers to the amplitude of the output (received) signal.

Taking the average of these three tests gives the following results: 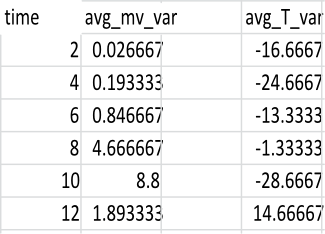 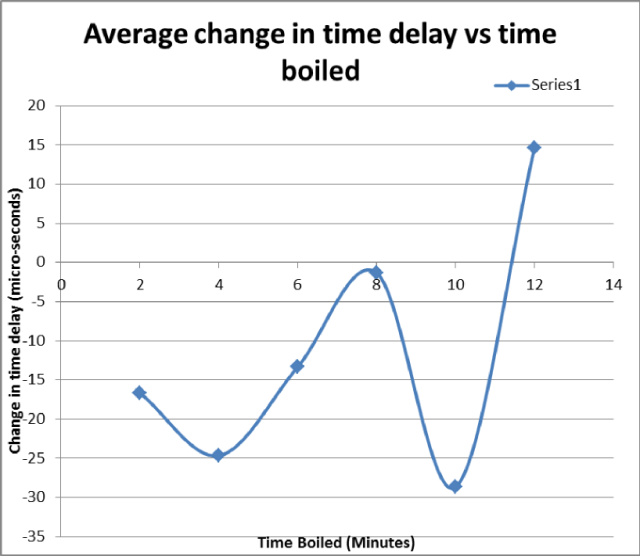 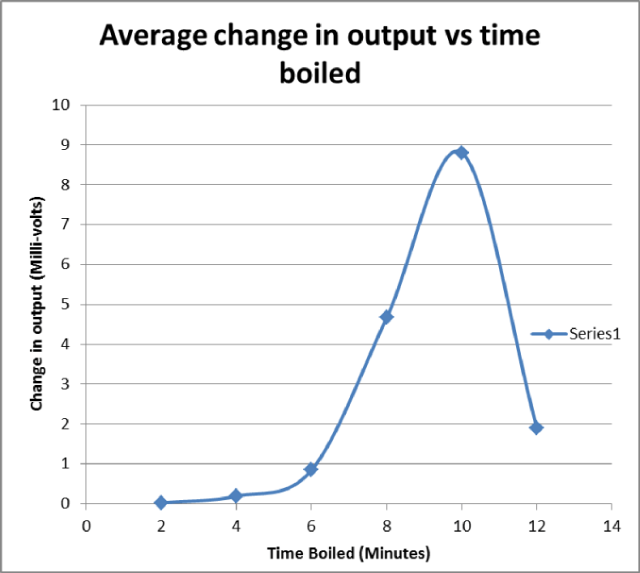 From the graph on the right, the results looked quite promising up until minute 12 which was egg 6. Egg 6 was the only egg that cracked during boiling. The egg was mostly fine but the reason for the rather low output may be due to the fact that the egg surface had cracks in it. This may be a good reason to repeat this experiment to make sure. Another thing that I’ve noticed is the extremely low amplitude of the received signal, it is normally in the order of tens of milli-volts at best. The piezo transducers used for this experiment are intended for use as speakers presumably for toys and things of that nature. This means that they have a frequency response of only around 1Khz to 7Khz before the sound output drops away to nothing. It may be the case that a higher frequency would pass through an egg much more effectively giving a greater output which would allow for more concrete results. The graph of time lag versus boil time is all over the place, I really don’t know that to make from it. Another thing is that there may be something I’m missing with the data. As in, I’ve graphed change in amplitude and time lag against boil time but this may be the wrong way to think about it. If you have any ideas about this, let me know!

Like Loading...
This entry was posted in Ideas and tagged boiled, detection, eggs, sound waves. Bookmark the permalink.